Fan Video of the Week: Supernatural Reflections 13.09 "The Bad Place” "I grew up in a small hotel with many rooms, so when I became aware of 'The Lion, the Witch, and the Wardrobe,' I inspected all the wardrobes, sure one had to be a portal to another world. I was also a true believer in faeries, and perhaps still am.” ― Jo Beverley

Portals have been an ongoing theme of season 13. That did not change for the second part before Wayward Sisters.

A portal to another world - One of my favorite children stories is Narnia. The Lion, the Witch, and the Wardrobe was my all time favorite series that I watched before Christmas. The White Witch, Ice Queen was the monster in that world with magic. Her character was so dominant, I used her name Jadis for my first dog. Narnia was not similar to the "real world". They were not even on Earth. Maybe because of that reason I have really liked the possible alternate universe. AU worlds have tons of possibilities, like Purgatory.  I wished it was used more. AU in season 13 is grim. There are not many people left. Compared to Narnia, the AU is a really hopeless world indeed. Something about that grimness is appealing but can I explain it more specifically? Not really. 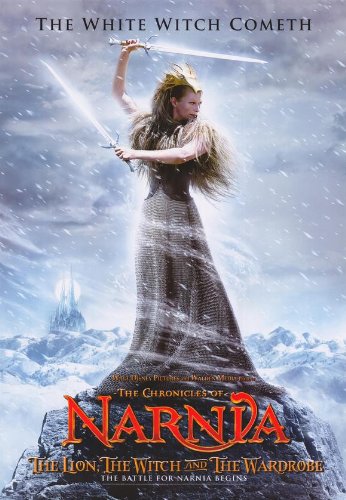 Jadis, the White Witch is the main antagonist of The Magician's Nephew and of The Lion, the Witch and the Wardrobe in C. S. Lewis's series, The Chronicles of Narnia. She is commonly referred to as the White Witch in The Lion, the Witch and the Wardrobe, as she is the Witch who froze Narnia in the Hundred Years Winter. Some recent editions of the books include brief notes, added by later editors, that describe the cast of characters. As Lewis scholar Peter Schakel points out, the description there of Jadis and the Queen of Underland (the main antagonist of The Silver Chair) "states incorrectly that the Queen of Underland is an embodiment of Jadis".

The video I chose for this article has some lady power. Enjoy!

I know that I'm running out of time

I want it all, mmm, mmm
And I'm wishing they'd stop tryna turn me off
I want it on, mmm, mmm

And I'm walking on a wire, trying to go higher
Feels like I'm surrounded by clowns and liars
Even when I give it all away
I want it all, mmm, mmm

And people like to laugh at you 'cause they are all the same, mmm, mmm

See I would rather we just go a different way than play the game mm, mm

And no matter the weather, we can do it better

So look I came here to run it

Just 'cause nobody's done it
Y'all don't think I can run it
But look, I've been here, I've done it
Impossible? Please
Watch I do it with ease
You just gotta believe
Come on, come on with me

If I can light the world up for just one day
Watch this madness, colorful charade
No one can be just like me any way

Alecia Beth Moore (born September 8, 1979), known professionally as Pink (stylized as P!nk), is an American singer, songwriter, dancer and actress. She was originally a founder of R&B girl group Choice in 1995. LaFace Records saw potential in Pink and offered her a solo recording contract. Her R&B-sounding debut album, Can't Take Me Home (2000), was certified double-platinum in the US and spawned two US Billboard Hot 100 top-ten songs: "There You Go" and "Most Girls". She gained further recognition with collaborative single "Lady Marmalade" from the Moulin Rouge! soundtrack, which topped many charts worldwide. Pink's musical direction moved away to pop rock with her second album, Missundaztood (2001). It sold more than 12 million copies worldwide and yielded the international number-one hits "Get the Party Started", "Don't Let Me Get Me", and "Just Like a Pill".

Pink's third album, Try This (2003), generated considerably low sales, but earned her the Grammy Award for Best Female Rock Vocal Performance. She revived her popularity with multi-platinum studio albums, I'm Not Dead (2006) and Funhouse (2008), as well as a string of successful singles, including the US number ones "So What" and "Raise Your Glass". Her sixth studio album, The Truth About Love (2012), was her first album to debut atop the Billboard 200 and spawned her fourth US number-one single "Just Give Me a Reason". In 2014, Pink recorded a collaborative album, Rose Ave., with Canadian musician Dallas Green under a folk music duo named You+Me. Her seventh studio album, Beautiful Trauma (2017), became the world's third best-selling album of the year and spawned the track "What About Us".

Recognized for her distinctive, raspy voice and acrobatic stage presence, Pink has sold over 40 million albums and 50 million singles worldwide, making her one of the world's best-selling music artists. Her career accolades include three Grammy Awards, a Brit Award, a Daytime Emmy Award and seven MTV Video Music Awards, including the Video Vanguard Award. In 2009, Billboard named Pink the Pop Songs Artist of the Decade. Pink was also the second most-played female solo artist in the United Kingdom, during the 2000s decade, behind Madonna. VH1 ranked her number 10 on their list of the 100 Greatest Women in Music, while Billboard awarded her the Woman of the Year award in 2013. At the 63rd annual BMI Pop Awards, she received the BMI President's Award for "her outstanding achievement in songwriting and global impact on pop culture and the entertainment industry."

Jack: I left to try to get a grip on my powers. I wanted to prove to you that I'm good, to do one good thing. So I did the thing you wanted the most. I experimented, opening doors to other worlds. I could almost do it. I could get right to the edge. But I couldn't see. I could only feel around in the dark. I needed eyes. A seer.
Sam: A dreamwalker.
Jack: Yeah. So I researched, like you taught me. That's how I found Derek. I didn't know if it would work, but it did. He dreamwalked, and I joined him... in apocalypse world. I could see what he saw. And I saw... And I saw her.
Sam: Her?
Jack: Your mother. She's alive.

James: You had a vision.
Patience: They never stopped. I see things before they happen. Usually small things -- a conversation, what someone will be wearing the next day. I tried pushing them down, ignoring them. But now? I can't. Dad... this is who I am.
James: No. If you get involved in that... Look, I was wrong to lie about Grandma. But you know what happened to her.
Patience: You raised me to do what's right, and this is what's right. If I don't go, people will die.
James: Patience, don't. You go now, you choose that life, you don't come back.

Dean: Okay, all right, so then we go out guns blazing. We take out as many as we can. Kid, sorry to drag you into this. This was not your fight.
Jack: If they get up here, they'll kill you all and take me.
Kaia: No, they won't. You said I could help you find the door to another world, right?
Jack: Yes.
Kaia: Then let's do it. Let's get out of here.
Sam: Hey, can you take us to our mom?
Dean: Can you do it?!
Kaia: I don't know. I think so.

Paula: So who is this buyer anyway?
Derek: I don't know. He e-mailed yesterday. Must've seen the Examiner piece. Probably just some gawking Waší'čhu.
Waší'čhu is a term for people of European descent, used by the Lakota/Dakota Native Americans. The word roughly translates to "takes the fat" or "greedy person", and was used to describe the white man's abuse of the land.

Jack: You're Derek Swan, Oglala Sioux, born and raised on the Pine Ridge Reservation.
Derek: I get it. You read the article.
Jack: Your father was a medicine man, and his father before him. Your lineage traces all the way back to the shaman Black Elk. You can see other worlds.
Oglala Sioux are one of the seven subtribes of the Lakota people that make up the Great Sioux Nation. The majority of the Oglala people live on the Pine Ridge Indian Reservation, located in the southwest corner of South Dakota on the Nebraska border.
Black Elk (Heȟáka Sápa) was a famous Oglala Lakota medicine man that lived from December 1, 1863 – August 19, 1950, and was the second cousin of famed war chief Crazy Horse.

Sam: So now what? We get Kaia to the Wind Caves, and then what? Force her to dreamwalk at gunpoint?
Dean: We get Mom back, no matter what. Remember?
Wind Cave National Park, located in Custer County, South Dakota, is considered a sacred site by the Lakota (Sioux) and other tribes of the Black Hills region of South Dakota. They believe the site of the caves is where the first men entered the world after its creation.

The page in John's Journal that Sam is reading recounts a case where John was hunting a djinn who had abducted two girls partying in the woods. After killing the djinn, John finds the girls' location and uses African Dream Root to go into their dreams and bring them back to reality. After returning the girls to their mothers safely, he is rewarded with a home-cooked meal for his efforts.

What did you think about the video or the article? Share your thoughts below!