After many months I have done some more work on my game! That's two weeks of Spring Break well spent I'd say. ^_^ First off, I drew a spooky evil clown. This one's for you, Sammy! 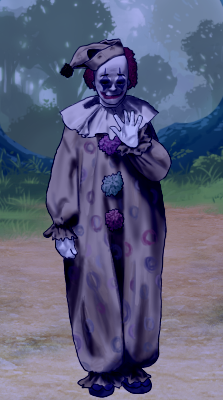 Then, I labored at making sprites for my enemies. I have six enemies so far, so I needed six sprites as well as the already-completed six big pictures. The big picture is the static one that appears during battles, for example the clown above. The sprites are little animated cute things that walk around on the game map. So if our heroes bump into a sprite on the map, that typically causes a battle to start. I can make them mill about, or chase the player characters, or run away. So here is a pic of them all together. (In the game you won't see all of these in the same place.) They are Leviathan, Werewolf, Vampire, Ghoul, Rugaru, and Rakshasa. Can you tell which is which? ^_^ 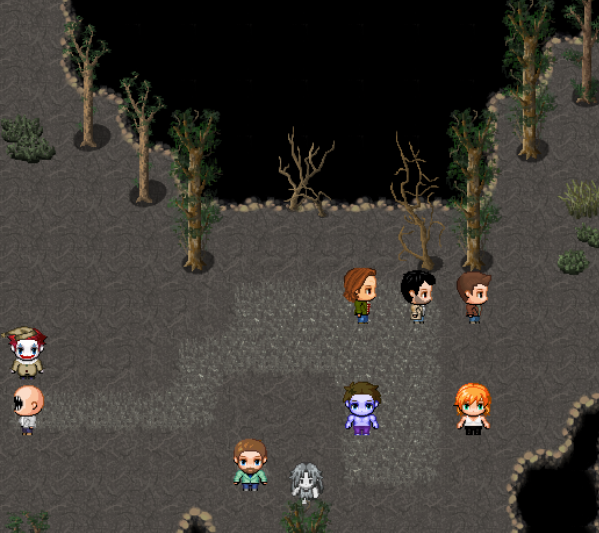 The Leviathan cracks me up.

I did a lot of pulling my hair out trying to program a Supernatural-appropriate way to kill my new clown. Or, as it is properly known, Rakshasa. You may recall its downfall is brass. So the way it works is Sam, Dean, and Cas all pitch in with their various weapons to injure the Rakshasa. Whoever has the Brass Knife equipped does more damage. Then when the enemy's HP are down to 0, a message pops up saying that [person with the Brass Knife] can now use the Special Move "Rakshasa Finish" and this will instantly kill it. However, other people whacking at it will have no further effect. So, if you haven't been fighting evil clowns lately and you see a clown sprite approaching at a rapid clip, better check that one of your guys has the Brass Knife equipped or else all you'll be able to do is run away.

Now that that programming challenge (well, it's a challenge for my little xoferew brain) is accomplished, I can easily translate it over into using a Silver Knife for Werewolves! Ha!

I think Sam will feel better if he gets to carry the Brass Knife.
Sam: "Why can't I see the knife? It would be reassuring to see it."
xoferew: "It's just text and code, Sam. There's nothing to see."
Sam: "There's a little icon box where you could have a picture of it, you just haven't done it yet."
xoferew: "...Yes, that's true." *Adds weapon icons to the bottom of lengthy Game To-Do List.*

Now, what are our three boys to do when an evil clown has beaten them to within an inch of their pixelly lives? Sure, they can eat some disgusting medicinal glop made of ground up yellow mushrooms or choke down some of Castiel's cooking, but isn't there a more pleasant, relaxing way to heal? How about a dip (skinny dip?) in a nice steaming hot spring that has some mystical healing properties? Yes, much better. Note: It is actually left up to your imagination what if anything is being worn below the waterline but since Sam speculates about leeches, I can't imagine he would remove everything. 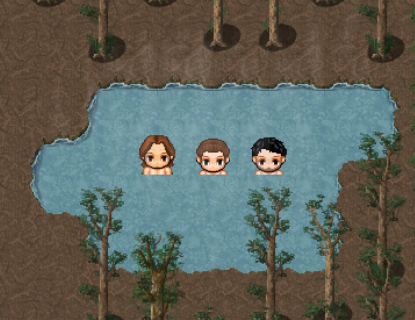 Oh, speaking of water, I have also made the first of a series of lily pad puzzles. So the idea is there are places where you have to cross a body of water by walking across lily pads. But your characters have to go one at a time so the lily pads don't sink, and some of them sink anyway. So the characters can get trapped or left on the wrong side of the lake if you don't pick an efficient path, and then you have to try the puzzle again. It looks like this: 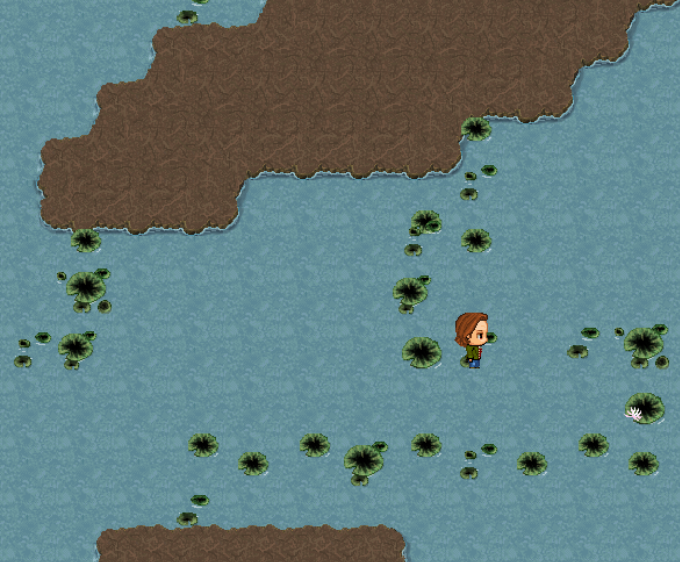 Here you see Sam cannot move forward because Dean's big stomping feet have already sunk the lily pad in front of him. Dean and Cas are chilling on the far side of the water while Sam searches for a remaining path.

So that's it for now! Next up, I have a half-finished Wendigo. But I'll probably be busy with school for awhile. Anyway, I'm excited to have made some progress, and it's starting to be a game I can play rather than just test little bits and pieces, so yay. Feel free to comment, question, or critique!
Rate this post:
0
Tweet
Responses (1)

Lilah_Kane
Accepted Answer Pending Moderation
0
Votes
Undo
Is it wrong to say that I think the Leviathan is cute?