View Comments
When Jeffrey Dean Morgan left Supernatural his career exploded.
Jeff has had starring roles in Grey's Anatomy, Magic City, Texas Rising, Extant, The Good Wife and he is currently playing the big bad Negan on The Walking Dead. What else has been going on in his life this year?
In January he flew to Romania to shoot a commercial. MTV reported  Supernatural’s John Winchester Comes Back From The Grave For One More Hunt
Jeffrey showed his fondness for Supernatural and his former co-stars when he tweeted,

Hey @JensenAckles and @jarpad in Transylvania. Gonna finish this vampire deal once and for all. You're welcome. pic.twitter.com/2uWvD7itec

Jeffrey had other concerns while in Romania. January was football playoff season, so he really wanted to know Can Seahawks superfan Jeffrey Dean Morgan catch the game in Romania?.
In January, Jeffrey also was a presenter at the Golden Globes, where he wowed Carrie Underwood.

Backstage at the #GoldenGlobes :@JDMorgan : "You look beautiful."
Me: "Thanks! You look like Negan."
Yeah, I'm a @TheWalkingDead fan! ?

The media jumped on the story.
Of course, Jeffrey has a life outside of acting. He also co-owns a candy store Paul Rudd And Jeffrey Dean Morgan Purchase Rhinebeck Candy Store To Stop It From Closing After Owner Dies.
Perhaps the most important part of Jeffrey's life is his family. Jeffrey is married to Hilarie Burton and that union has a connection to Supernatural. PopSugar tells us Who Is Responsible For Jeffrey Dean Morgan and Hilarie Burton's Love? Jensen Ackles, of Course.

In an interview with HuffPost Live in 2015, Jeffrey opened up about his costar setting them up on a blind date, and the story will basically turn you into mush. "I happened to be single and Jensen said, 'I've got a girl you should meet,'" the Walking Dead star explained. "So I went to a bar and I met Hilarie at a bar with Jensen and Danneel, and the rest is history."

You can see his interview about their first date here.
In pictures from the Red Carpet at the Golden Globes to one taken on a family vaction, you can see how in love they are.
Jeffrey Dean Morgan & Hilarie Burton Look So in Love at Golden Globes 2017 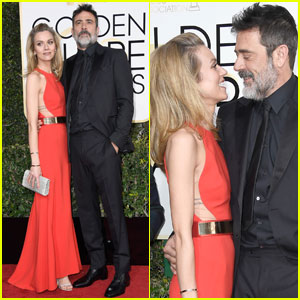 Sealed with a kiss! The Walking Dead's Jeffrey Dean Morgan gets passionate with wife Hilarie Burton on family vacation How does Jeffrey's role affect his home life?  Why Jeffrey Dean Morgan's Wife Hilarie Burton Likes His Brutal 'Walking Dead' Character.
Jeffrey Dean Morgan was fantastic as John Winchester on  Supernatural. We are so happy that the rest of the world can see how talented he is. We hope you keep it up JDM!
back to top
JComments