Okay, I'm going to take a paragraph to reflect on what just happened there. I'll also try to avoid rehashing what I said in my review. This is David vs. Goliath. Lucifer is unyielding and deceptive and yes, has one giant ego. He's also extremely powerful. I've heard complaints that people are getting tired of Dean crying but his meltdown is significant here. His vulnerability, his weeping for the loss of mankind and his brother, a purely human trait, is ten times more powerful than Lucifer's false act of sympathy. That vulnerability makes him stronger than Lucifer at least morally and as long as he hangs onto that humanity, he has a fighting chance. The second he loses that humanity, like his future self did, he becomes weaker and ends up getting squashed like a bug. It's the same lesson Sam had to learn the hard way in killing Lilith. Lucifer's greatest weakness is he underestimates the human spirit. Same for Zachariah. We're just a bunch of hairless apes to them. History has proven that such arrogance leads to downfall.

Okay, back to Dean, who's back in 2009 with Zachariah. Sort of like going from the frying pan into the fire. Dean has the right line though. "Well if it isn't the ghost of Christmas screw you." At least he still has his sense of humor. Zack now goes for the false sincerity. He tells Dean he's the only one who can prove Lucifer wrong. Dean thinks it’s one of Zachariah's tricks, and lord knows we are thinking that as well. Some of the "examples" of the future were pretty heavy handed. Zachariah says the time for tricks is over. That's not an answer! Zack implores Dean to say yes to Michael, before the virus begins, before Lucifer gets to Sam, before billions die.

Dean sees his point, he does need the change the future. Zachariah always forgets one thing with Dean though. Dean doesn't believe the future has been written yet. He turns away from Zack in contemplation and he gets that defiant look on his face, for something has clicked inside. "Nah." "Nah?" Zachariah asks, stunned to hear that answer. "Haven't you learned your lesson?" “I learned a lesson alright. Just not the one you wanted to teach.” Zack goes off, threatening to teach him another one. "Because I've got you now boy and I'm never letting you-" Dean's gone! Suddenly, Dean is on the same dark street corner as Castiel. Normal Castiel, with neat hair, suit and trench coat. "We had an appointment." Woo hoo Cas, you rock. Castiel asks how Zack found him. Dean pulls out his cell phone and answers while dialing. "Let's stay away from the Jevohvah's witnesses for a while." For a while? I've been trying t avoid them my whole life. It's too tall an order, they get you eventually. Castiel wants to know what he's doing. Dean holds the phone up to his ear. "Something I should have done a long time ago."

Dean waits beside a bridge, and up pulls a crappy gold Lincoln Continental with Oklahoma license plates. Guess who? You see!!! Dean didn't want to send Sam away both times. He did it out of overinflated sense of duty. He realizes this whole sacrificing his family for the sake of the world ends the world! Zack ain't so bad after all. Dean did learn the right lesson.

Sam gets out of the crappy vehicle and he and Dean approach each other. No hugs, just awkwardness. Sam especially looks nervous, so it’s obvious he has no idea what Dean wants. He's especially nervous when Dean pulls out the demon killing ginsu and holds it for a few seconds. He then lunges forward with it and gets Sam straight in the heart. Sam falls backward in stunned disbelief before the lights go out. Psych! I know you saw the episode first. No, Dean hands it to Sam. "You're serious, you want back in. You should hang onto this. I’m sure you’re rusty."

Sam takes the knife with some apprehension. Dean says he’s sorry. “I don’t know whatever I need to be, but I was wrong.” Sam wants to know what made him change his mind. You were Lucifer! No, Dean gives him the "long story" line, which is network television speak for we don't have time for this, budget you know, so it becomes an off camera conversation while driving through America's heartland. “The point is, maybe we are each other’s Achilles heel, they’ll find a way to use us against each other I don’t know, I just know we’re all we’ve got. More than that, we keep each other human.”

“Thank you, really, thank you.” Sam might be grateful, but he's quite subdued. He actually looks really depressed. I wonder after Dean's rebuff if he holed up in a cheap motel or something and downed a pint of HaagenDazs. Or Jack Daniels. Or both. Sam promises he won't let Dean down and Dean knows he won't. “You are the second best hunter on the planet." Aww Dean, you softie. Sam manages somehow to crack a small smile over that. He wants to know what they do now. Dean sets the tone for what's coming. "We make our own future." The ending line goes to Sam. "I guess we have no choice."

So, with that string of nice heavy episodes, we're back to something light next week with brothers reunited. It's very much needed, since the brain trust of Kripke, Gamble, Carver, and Edlund just blew my psyche to smithereens. Thanks guys!

# cheryl42 2014-09-18 16:01
Ah yes the lesson that these two never seem to learn. If you run off to do your own thing one of you becomes the devil the other one wakes up a deanmon. Come on guys learn the lesson already and stick together.
I loved this episode. Jensen knocked it out of the park. He was fantastic in playing the subtle differences between the two Deans. Jared's part was short but so powerful, heartbreaking and scene stealing. I couldn't take my eyes off of him, there was no trace of Sam anywhere. Jared is so good at these kind of roles. I agree one of the best scenes in the whole series. Loved the re-cap the first time I read it as well as the 3rd time. :)

# Lilah_Kane 2014-09-18 17:16
I think this is one of the best or even the best episode of Supernatural in my opinion. Both Jensen and Jared nailed it and I liked the "Back to the future crap." In a commentary I think they said that Jensen had called after it was fully shot and said "Don't do this to me ever again" but he nailed both Deans even if it seemed to be pretty hard. With the commentary the whole episode opened up to me more and all the details. It was like a short one hour movie packing it all in it. Every one of the cast did great.

And also this was the first episode where I did something together with other fans and watched the episode with hubby (with commentary) It was the Croatoan day. Once in a lifetime in the real world so we painted Croatoan to our arms. It got even trending in twitter. It was fun and cool. 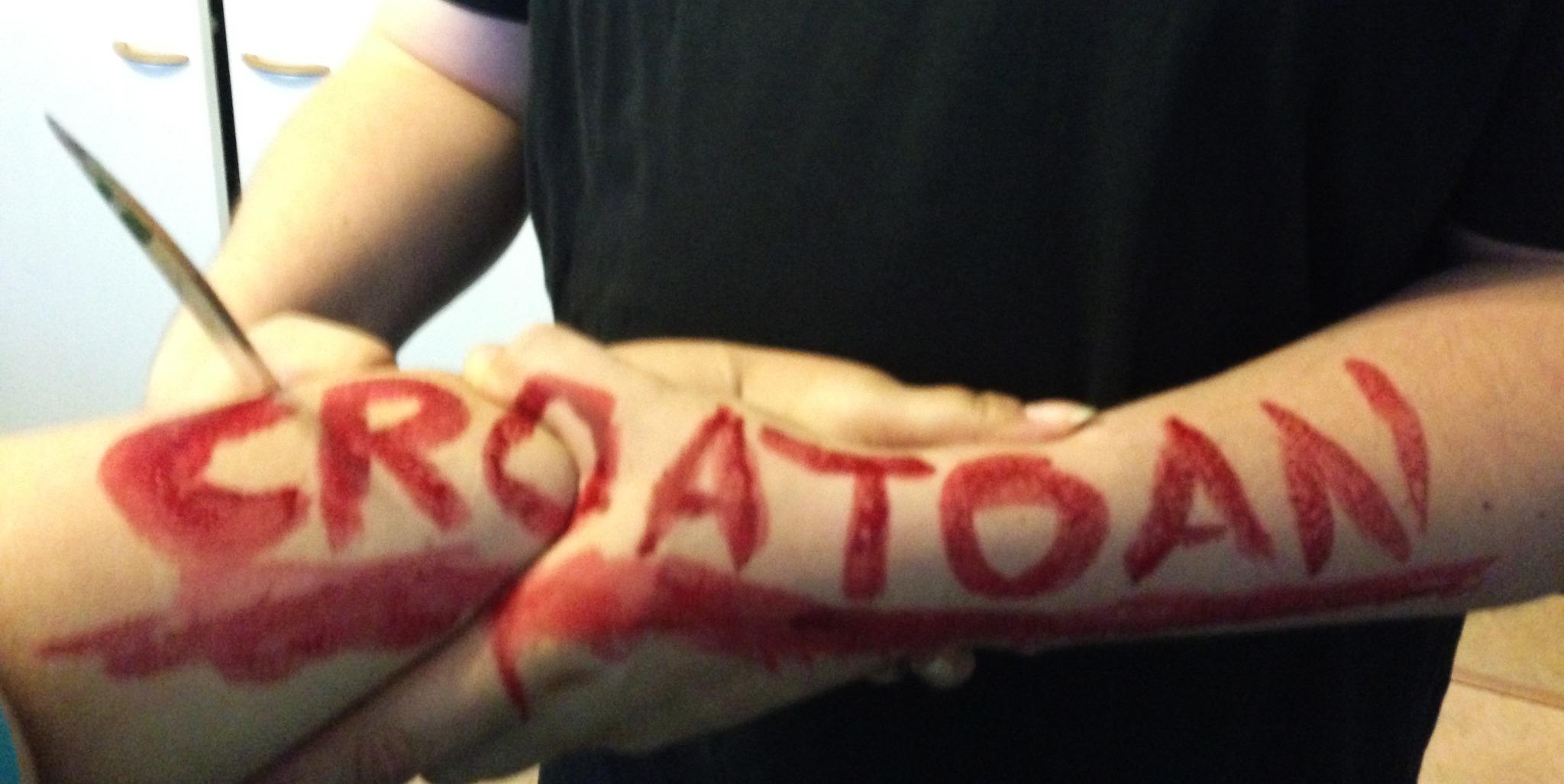 Don't worry. It is just paint.

Anyway the date was 1st of August 2014 from the camp sign. Luckily this was a good article to tell about it and I guess it is now a part of history as the date passed.

# Bardicvoice 2014-09-18 18:35
I ADORED "The End"! I wasn't writing for the WFB yet when that episode aired, but if you'd like to see my very long, very contemplative, very enthusiastic analysis, you can find the whole thing on my LJ here: http://bardicvoice.livejournal.com/58469.html ("http://bardic voice.livejourn al.com/58469.ht ml"). It's way too long to repeat!