View Comments
Supernatural in the news this week.
Catching Up with Current and Former Cast Members
Interviews
Interview with one of ‘Supernatural’s favorite hunters, actress Shoshannah Stern (Eileen Leahy)

You fine people really are the gift that keeps on giving. Now help me slide down your chimneys, stuff the stockings, and eat all the cookies. #SPNFamily #Oncers #SPN #OUAT https://t.co/bVKm4MQIIf Netflix has all new episodes of “Spirit Riding Free” today, Friday. I’ve been in the studio for DreamWorks Animation a lot for this one. Very proud of it. Good stuff. This is my guy, Grayson. #SpiritRidingFree pic.twitter.com/SVdNGmbakC

Hey #PAXWest, we hope you’ll join Rachel @RADirector & Kristin from @RAOutreach, along with reps from other amazing orgs, as they talk about igniting the power of fandom for social giving! ?? pic.twitter.com/wp9NMwd0WW

I made you something. Taby helped. So did Riley. @Stands encouraged me. If it would bring you a ray of amusement and you’d like to help some fellow wayward souls at @NewLeashUSA , please go for it. https://t.co/lfLi42gnNe #thingy pic.twitter.com/6U0Oc0Irxw

It’s not just coloring. I’ve included Activity Pages! A paper doll! An achievement list page! The chance for you to make your own damn design and not have to be limited by my lack of talent! (I made myself giggle so many times.) https://t.co/pphsjSEtKe


Catching Up With Current and Former BTS Personnel
If you live in Atlanta and want to see a sneak peek of Eric Kripke's new movie you're in luck. ‘The House With The Clock in Its Walls’ Screening Passes – Free Passes for Atlanta Screening See the episode of DC Super Hero Girls that Showrunners' Assistant Meghan Fitzmartin wrote.
Show Tidbits
Doux Reviews compares Five (okay, six) Crossover Characters: Lucifer versus Supernatural
Supernatural cast and writers open up about shorter seasons – and whether the episode count could drop further
Sam and Dean are among the 37 Times Siblings Made Things More Interesting
Supernatural is among TV Lines'  10 Most Anticipated Returning Shows
A Look Back: ‘Buffy’ Actors on ‘Supernatural’
Supernatural boss rules out doing a crossover with Arrow: "Not going to work"
The effort to bring Wayward Sisters to life continues.

The Wayward Project;
What does Wayward mean to you?
A series of (4) videos m of the reason why we, the citizens of earth (as a collective, not just SPN fans), need Wayward Sisters.
(1/6)#thewaywardproject

SECRET’S OUT GUYS ????
I will be making my Big Apple debut!!

Can't make it to a Supernatural convention? You can livestream panels from the one in Charlotte, North Carolina 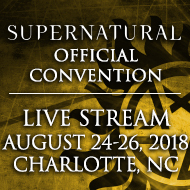 Louden Swain to Play Show in Seattle on January 19!

I'm in a New York State of Mind because @BlakeLewis & I are playing there Sept. 31st, @RockwoodNYC hope you can make it!! https://t.co/PXkg2FCAoq pic.twitter.com/iF8iYZWnlw

The Revenge of the Nerds After Party is a week from today at the Colorado Springs Marriott! Have you bought tickets yet?https://t.co/AfgzwozcoW#CSCC #cscomiccon #RevengeoftheNerds #Booger #Wormser #Lamar #ColoradoSprings #party #Denver #Pueblo pic.twitter.com/ZsSNLaTIot

#MitchMonday #MondayMotivation
Mitch Pileggi will be @DragonCon in less than 3 weeks.
With the dude who’s character ran him over in the last episode of #TheXFiles ???
Tickets & info here https://t.co/Vk00vsAr1o pic.twitter.com/au35kvDlp2