View Comments
Supernatural in the news this week.
Catching Up With Current and Former Cast Members
Interviews
Nerd Alert News Blog asks us to Get to know that charming mortician (Athena) from ‘Supernatural’ actress Sarah Troyer 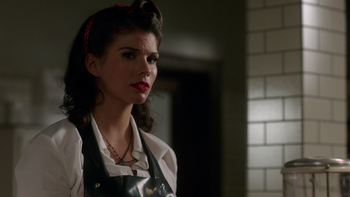 Nerds and Beyond published an Interview with Jason Manns and Louden Swain!
Kim Rhodes (Jody Mills) was interviewed in several outlets this week.  She talked with KTLA5
Kim was also interviewed by Trunkspace.
Jim Beaver (Bobby Singer) was interviewed by Vicki Abelson
Rick Springfield (Lucifer/Vince Vincente) is making the rounds while promoting his new album The Snake King.
He appeared on Harry Connick, Jr. Live.
He discussed his battle with depression on Good Morning America

Beloved rock icon @rickspringfield gets candid about his decades-long battle with depression and how the disease nearly drove him to suicide. @paulafaris has the exclusive interview. pic.twitter.com/19BcS3I5P3

Rick also talked with Long Island Pulse in Rick Springfield Strips Down
You can catch up with the creative side of Misha Collins in this months American Craft Magazine Misha Collins in American Craft
Thanks to SpnUK for the tip.
Other Projects
Shoshannah Stern (Eileen Leahy) appeared at the TCAs this week to talk about her new series This Close.

From Deadline Hollywood ‘This Close’ Creators: “Every Minority Group Has Right To Tell Their Own Story” — TCA
Tru Biz posted (includes the trailer)
This close will premiere on February 14, 2018 on the Sundance channel in the US. Canadian fans and fans in the UK will also be getting the series

Very happy to tell you that #ThisClose on @sundance_now will be available in both Canada and the UK! Stay tuned for the premiere dates for those as they may be different and for information about other countries. https://t.co/ioeRLVLsjv

The trailer is now available
You can catch Jeffery Vincent Parrise (Asmodeus) in The Detour on Hulu.

Sigh. Jareb always knows just what to say. Catch up with the Parkers before the new season returns Jan 23! pic.twitter.com/RI1oFJW2sv Adam Fergus (Mick Davies) can be seen on Irish TV

We will finally be able to catch Kathryn Newton's  (Claire Novak) series Little Women in the US.

The ##LittleWomenPBS miniseries is coming to Masterpiece in May and we can hardly wait!@willafitz @kathrynnewton https://t.co/WC9AROWxQs

Jason Manns' new album Recovering With Friends [was] Released 1/19/18 Jason is partnering with Creation Stands to donate some of the proceeds of the album to charity.

Excited to be launching @jasonmanns Recovering With Friends album this Friday. If you decide to purchase through Stands, the CDs will be signed and a portion of all profits will benefit the Jacmel Children's Center. pic.twitter.com/QyQVzgOsj4

Want to keep up with Osric Chau (Kevin Tran)? He has just launched his own app!

I just got an app! ??
Link to download below ☺️https://t.co/P9i8oFsijX pic.twitter.com/Hf4XfGsvFR Today we #RISE!! I hope you’ll join me in supporting the Chicago Foundation for Women, who know that when you invest in women and girls, you invest in a society that works for everyone: https://t.co/2kVL6w6oQt pic.twitter.com/QOP0A9OVLp

#RISE & shine! (And by "shine", we mean "create a fierce inferno of social change"). Join Sam Smith in supporting the Chicago Foundation of Women to empower women & ensure equality for all! https://t.co/qwvOempSEM pic.twitter.com/rzsP0ni60O

The campaign can be found here.
Miscellaneous
Finlay McKay studios has posted more outtakes from the EW shoot that featured Jensen Ackles, Jared Padalecki and Misha Collins. Thanks SpnUK for the heads up.
Hilarie Burton Thanks Fans for Sending Jeffrey Dean Morgan ‘Home in One Piece’
Hit 'Next' for more news


Catching Up With Current and Former BTS Personnel
Sera Gamble was interviewed on her series The Magicians and her upcoming series You.

Good news for Ben Edlund The Tick - Renewed for a 2nd Season at Amazon
Jenny Klein has a new show, Cloak and Dagger, coming to FreeformTV

Yes, her name is Winchester. Yes, she battles supernatural evil. No, there are no plans for a cross over but it would be epic. + this video: pic.twitter.com/pkgvGCR801

Continuing my day of purging, I found my original audition sides for Donna! I think I'm going to frame them ?❤️. pic.twitter.com/FUuCQPHhG7

PopSugar lists 25 of the Funniest Things That Have Ever Been Said on Supernatural, Period

Here’s the original concept art for these lovely creatures I did and Ben Carruth did an amazing job bringing them to life! ☺️ #supernatural #waywardsisters pic.twitter.com/b1ng2bWCyA

We'll find out next May at Cross Roads! One of the largest gatherings of SPN guests in 2018!https://t.co/AQvyIeXuIN#SPNUK #SPNFamily #spn #Supernatural #marksheppard #markpellegrino pic.twitter.com/5HfMhf2TmH

@bigEswallz will be a guest at the March 23-25 Collective Con in Jacksonville, FL! Best known for her role as Amara on Supernatural. Emily Swallow will be in attendance on Sat & Sun ONLY!