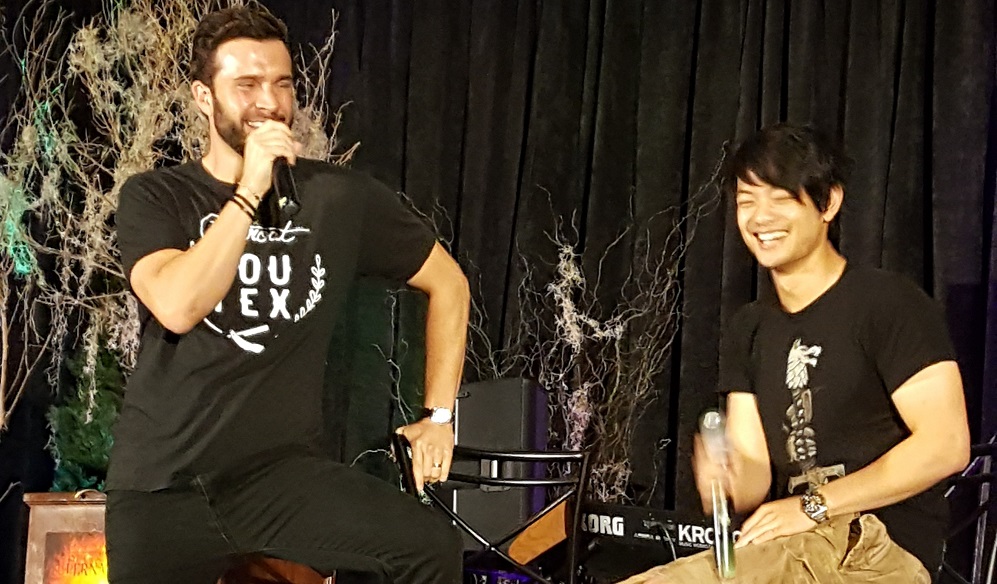 IndieGoGo campaign here.
Rob was also featured in Nerds and Beyond  as they wished him Happy Birthday [to] Rob Benedict – See Our Top Rob Moments!
It's been a big week for Ty Olsson (Benny Lafitte).

He has received a best actor nomination for his work in A Surrogate's Nightmare.

#ICYMI Congratulations again to the Best Actor Nominees! Well done to you all! ???#ubcpactra#BCCreates#ActorLife#yvr#vancity#Vancouver pic.twitter.com/kks4RJun1T

Ty's film FTL continues to be rolled out at showings around the world.

Ty has a role in Slasher 2, which is coming to Netflix

and to Canadian TV in October

#Slasher's S2 premiere date has just been announced! Keep track of all #Cdntv debuts & finales with our calendars! https://t.co/M7Yz9v635o pic.twitter.com/6SeE8Ptkl8

Sebastian Roche's (Balthazar) project, Negative, The Movie, is now available on on Digital HD and On Demand

#NegativeTheMovie is out today on Digital HD and On Demand. It's a great thriller with some kick ass fight scenes as you can see! Thanks for that kick to the face @katiawinter !! #simonquarterman @joshuacaldwelldirector @danielocicero to view go to gwi.io/NegativeMovie

Chad Lindberg's (Ash) new film Security, is out in theaters.

Antonio Banderas is a security guard who protects an 11-year-old girl witness in “Security.” Antonio Banderas is “Eddie” a former Marine Captain going through rough times but gets a job as a mall cop. While going about his routine, he sees a US Marshall convoy ambushed by armed mercenaries. He then discovers that the convoy has Jamie (Katherine de la Rocha), an 11-year-old girl who is a trial witness. Gabriella Wright, Ben Kingsley, Liam McIntyre, Shari Watson, Chad Lindberg, Jiro Wang, and Cung Le star in the film alongside Banderas.

Imagine what it's like to be inside the life of a Navy SEAL—journey into their world in this preview for #SEALTeam. ?? pic.twitter.com/4LX9325Hp7

Aldis Hodge (Jake) is spreading his wings. He has opened an art exhibit

Finally I get to give you guys a sneak peak of 'Through The Looking Glass'. We're displaying at Art Prize 9, so if your in Grand Rapids stop by 800 Scribner NW Grand Rapids, MI 49504 and vote #65669 This work was created and painted by me and my awesomely talented friend, @honeiee, (who just sold out her solo exhibit btw ??proud friend over here). This exhibit begs us to question how we perceive cultures we've never engaged with before. Is our perception positive or negative? What are the reasons and who are the sources that shaped those perspectives? And how can we continue to improve on human engagement in a positive way without having negative assumptions attached. #artprize #art #artists #oilpainting #wood #distressed #africa #muslim #unity #linen

Excited to announce my shirt campaign benefiting Rainbow House. You can check it out here: https://t.co/f4Qpweg508 #Balls pic.twitter.com/YgcOXwkE0f

Catch his campaign  ">here.
Mark Pellegrino (Lucifer) is raising money for Attitudes in Reverse with a special showing of his film, The Last Train.

Join us for a good cause. Come on out. ? pic.twitter.com/sSwcSgUxFg

Looking forward to seeing all the SPN fans and volunteers at this year's DSG Buddy Walk on Sunday Oct 29! pic.twitter.com/vOCvvucBI4