Hunting with Nate Winchester at the Derby City Comic Con Unlike some of our awesome staff, I am not as fortunate to make it to full SPN conventions, but must resign myself to the more local, geeky affairs.

This does allow me to play a challenge, however.  Finding Supernatural at a convention dedicated to it is easy, but finding it at a general con?  That's when you start feeling like you're Sam or Dean.

The Derby City Comic Con is a small, 2-day con here in Louisville, KY.  First up I showed up in my leather coat, samulet, ring, skull bracelet and "Winchester Bros. Hunting Evil" t-shirt.  No signs of other Deans that I could see, but there was (in my opinion) the most adorable collection of angels this year:

Not only a fine costume but I dare say if this girl told me she was Misha's kid I'd believe her.  She also participated in the cosplay contest and did a shitck of being confused like Castiel.  I don't know if anyone else laughed (bunch of philistines around here) but I did, and you're a winner in my book!

Points for actually including a homemade FBI badge!

She participated in the kid cosplay competition on the 2nd day which also had some surprisingly good entries this year. I do wonder if the judges have seen the source material which is a gross injustice if you ask me.

Didn't make it until the second day but that's ok, some of us were still there to appreciate your efforts!

There were also apparently two other Castiels there but somehow they slipped by me.  If you, reading this, happened to be one of them, feel free to say hi. :)

Well besides angel hunting there was also swag stalking!

Um... yeah unfortunately SPN doesn't have much in the way of goodies (I already have both Impala replicas and the funko figs).  I was, however, able to find a pair of fridge magnets (from S6 & S7 apparently) as well as a button collection:

All 4 buttons will probably end up on my SPN jersey so if you make one of these cons, you'll know what to look for to find me.

Thankfully, when the powers that be fail us, the fans are ready to come through with swag to scratch your itch, and I was fortunate to get one of the two remaining pint glasses with our show's logo: 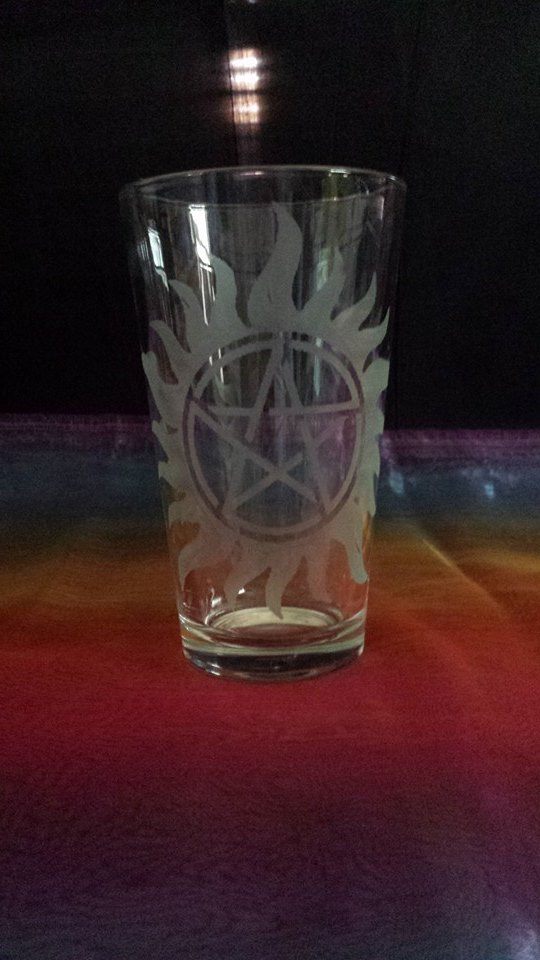 (though if you want one of your own, you can order it here)

So after picking up all the 3d objects I could find related to Supernatural, it was now time to hunt down any graphics I could.

Now I will admit that I'm a bit of a "snob" when it comes to geek art.  I think multilayered pieces that mix geeky references together or which you have to think about a moment.  Most of prints of Supernatural at the show were of the straight-line variety, like the full SPN collection by Keven Leen:

(note: I bought these in card-size, he has a variety of print scales to choose from)

I do like his eye for detail and the boys with the green cooler and Impala is one of my favorites.  Likewise two other artists had prints of basic S&D headshots (but my budget didn't allow me to get them).

By far the winner of my hunting expedition this con was the always great Jenny M Stead, who captures my prefered off-beat art desire:

Last year I had gotten the Dean bookmark.  This year I completed my collection with it, Sam, and Crowley (Castiel bookmarks had sold out) as well as her "favorite foods" line, which I love because it captures so much of the characters with such simple drawings.

And that's all for this little con.  Coming up at the end of the month we have the larger fandomfest.  Will the hunt be harder or easier?  Chuck only knows...

# Alice 2014-07-20 21:07
Here's a picture of a Castiel we met at our even smaller Ohio Comic Con in Columbus in Sept 2012. There were a couple, but not many. I also bought a cool promo poster for season six highlighting Castiel which got stolen at Toronto con. :(

Alice, do you want me to look for another copy of that poster at the Fandomfest coming up?

You going to fandomfest this weekend? I'll probably do another, similar article after that's past.